We asked, and grey lovers responded!

After taking in 21 new dogs in early August, we asked for donations of $1,000 or more to kick off a special Matching Fund for North Texas Giving Day, scheduled for September 23, 2021. Our goal was to raise $25K, and SEVEN donors helped us meet that goal in the first week of this campaign. And now, with North Texas Giving Day less than a week away, one more donor has stepped up to add another $5K to our matching fund, taking us to a total of $30K! This fund will serve as a match for the North Texas Giving Day general donations made by other friends of GALT’s greys. We are so thankful to the members of GALT’s 20th Anniversary All-Star team! You can find out more about them below, but YOU can help us meet this Matching Fund challenge by making a general donation, beginning September 1st, at this link.

The All-Star pledge that started it all came from the Brockhoff Family Fund. Cara and Jerry Brockhoff are well known in the greyhound community due to Cara’s stunning NorthCoast Greyhound Support jewelry! Over the years, NorthCoast has donated a total of over $600,000 from jewelry sales, to numerous greyhound adoption groups all over the country. Cara is retired now, so you can primarily find her gorgeous pendants, earrings and bracelets in online auction fundraisers. Four of her pieces are featured in GALT’s Sizzling Summer Auction, which runs from August 19th through August 29th. Jerry and Cara have adopted 37 greyhounds, many of them seniors. Their generous pledge is in honor of all of their hounds, but they are highlighting three of them here. 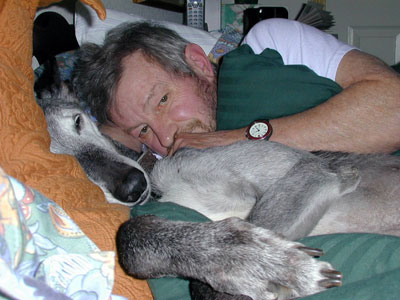 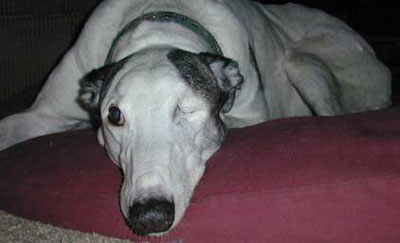 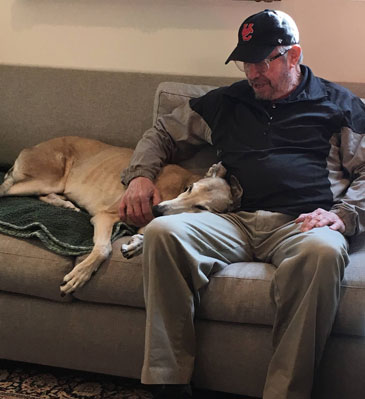 Billie was the Brockhoffs’ first grey, adopted in 2001. Her write-up on the Greyhound List, an early national online communication, asked “Does anyone need an 11-year old one-eyed broodie found wandering the streets in Kansas?” With the help of the GH Underground Railroad Billie made it to Dallas, Cara flew in and they both spent the night at the McQuades before flying home to California. Billie introduced the Brockhoffs to a friendship with the McQuades that has lasted for decades!

The Greyhound List also mentioned an 11-year old stud in Ohio in 2004. “Pick us, Rambo!” the Brockhoffs begged. They flew to Chicago and rented a van to drive Rambo to his new home in California. He was Jerry’s heart dog, and the two were featured in a pictorial essay in Celebrating Greyhounds as “A Man and His Dog.”

The Brockhoffs apparently had a penchant for 11-year old greys, adopting GALT’s Buddy in 2017. Perhaps his racing name (Dakota’s Rambo) and lineage, along with his age, pulled at Cara’s and Jerry’s heartstrings. It was time for another road trip to Dallas to see the McQuades, and also a nice visit with the Jones family, Buddy’s fosters in Amarillo.

The second pledge came from the “Fab Five” – a gaggle of greys who adopted Lori and Bill Elmer! The Fab Five are notorious for stealing Lori’s iPad and making donations or bidding in GALT online auctions. The Elmer pack includes Nova, Lana and three GALT greys – Sage, Marcus, and Donnie. Bill, Lori and the Fab 5 are making their donation in memory of their 15 Rainbow Bridge greys, especially Rock (aka Pleasant Rocker), the sweet boy who started the Elmer greyhound adoption craze in 1992. 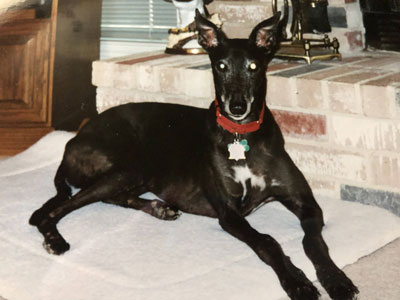 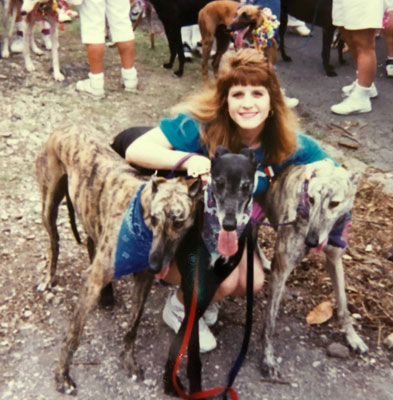 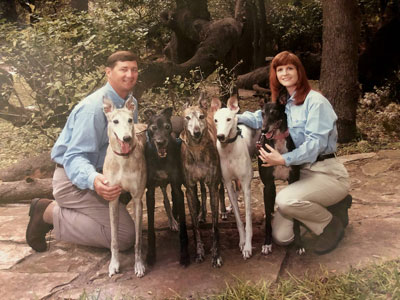 Pledge #3 came from Susan Smith and Wayne Axtell, adopters of two greys who just naturally had to be taken together in 2014 – Biscuit and Gravy! Susan and Wayne recognized the joy of adopting a couple of senior greys, but they had to say goodbye to Gravy in March 2016 and later to Biscuit in September 2019. They are dedicating their donation to these very special Rainbow Bridge Angels. 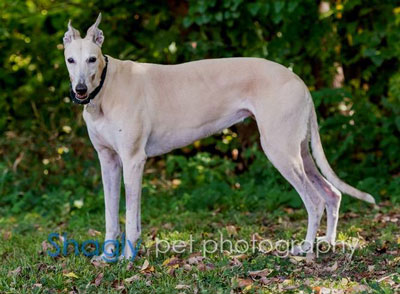 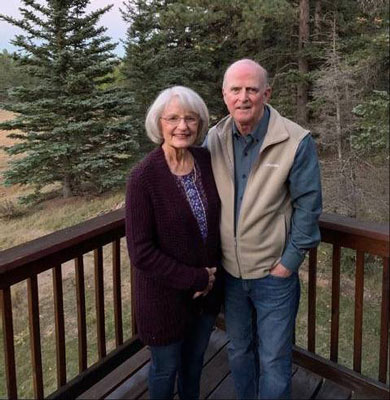 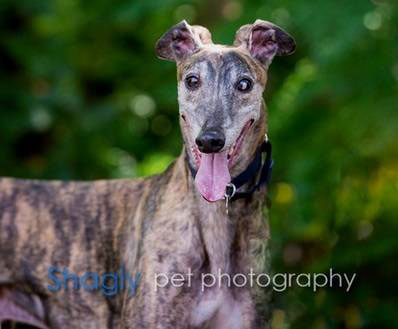 Our fourth pledge came from a couple of grey lovers who prefer to remain anonymous. Long-time adopters, donors and volunteers, they have one GALT grey now and one at the Rainbow Bridge. They are honoring both with their All-Star donation.

Rita and Chris Wulke contributed pledge #5 in honor of all five of their gorgeous greys! They adopted their first GALT hound, Slate fka Corpus, in 2014 at the GALT birthday party, and he joined the Wulke Pack with Ava, a GPA Houston hound. Rita says that Slate “was an instant fit and absolutely easy.” The next year Chris and Rita went to Dallas to pick up Shelby, fka GALT’s Rosa, who quickly became Chris’s heart dog. In addition, they made a spur-of-the-moment decision that day to also take Fleet! Sadly, the Wulkes lost both Ava in subsequent years and Shelby to osteosarcoma two years ago. In the summer of 2020, they were notified that GALT had Slate’s nephew, Armani. Rita and Chris jumped at the chance to foster him, and from the moment he got in the car they knew he was theirs. The Wulkes adopted Armani, now known as Chill, after just a few weeks. Now their three stunning black male greys live contentedly together, and the Wulkes feel very fortunate to have them. Rita adds, “We are proud supporters of GALT and always will be.” 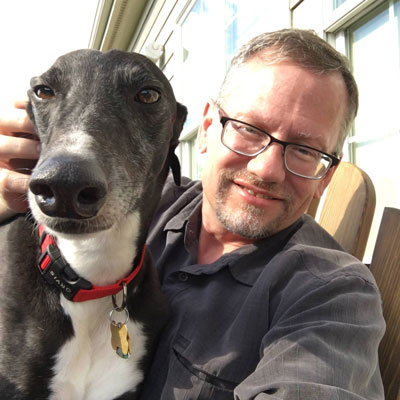 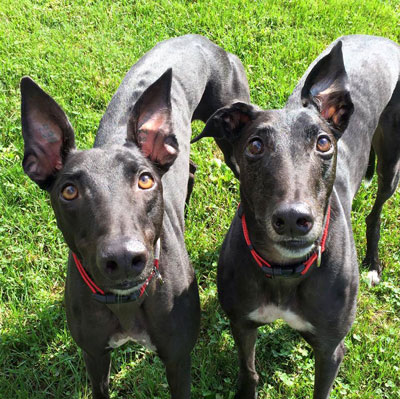 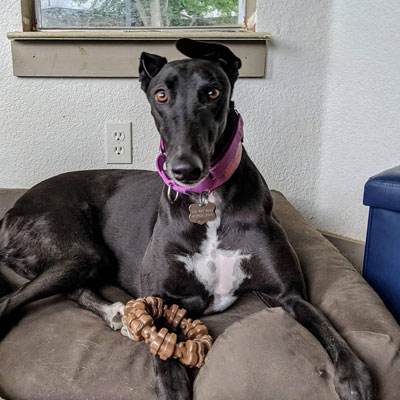 Pledge #6 came from Diane and Todd Howell, who started GALT’s New Mexico Chapter in 2017. The NM Chapter is getting ready to celebrate their milestone of “100 Hounds Helped”. They have personally adopted six GALT greys and sighthound mixes and wanted to give back to the group by joining GALT’s 20th Anniversary All-Star team. Their beloved Maddie, Nicole, and Zuri are running at the Rainbow Bridge. Roxie, Parker and Skyler are currently running things and training new fosters at Casa Howl in Rio Rancho, NM. The Howells have exclusively adopted returned and stray hounds, as their greytest passion about GALT’s mission is the value of “No Grey Turned Away”. The Howells treasure how their hounds make them laugh and smile every day – and thank GALT every day for that opportunity. 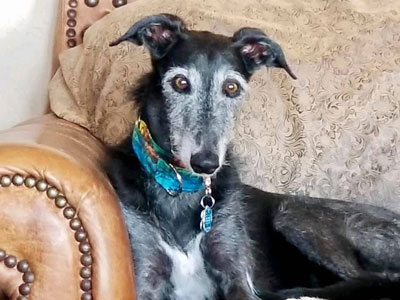 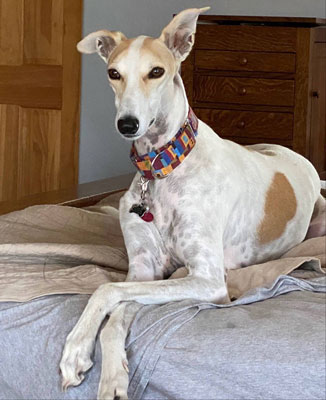 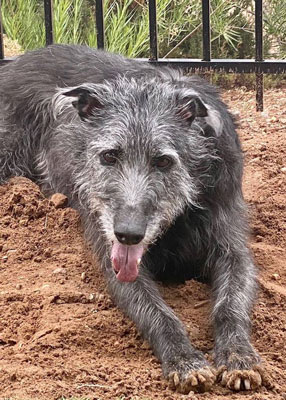 Our 7th pledge came from Valeri & Scott Wickersham, who are both current members of the GALT Board of Directors. They are also active volunteers who spend a lot of time at Houn’ House – exercising dogs, helping with landscaping chores, meeting with maintenance contractors, and pitching in wherever else they are needed. The Wickershams know firsthand that funds are greatly needed to help GALT cover the operating expenses at Houn’ House, so they quickly made the decision to join the All-Star team. Their first beloved GALT greyhound, Lizzy, passed away in December 2020. Their big brindle boy, Flash – fka GALT’s Flyer– has helped fill the void left by Lizzy and keeps things lively at the Wickersham casa. 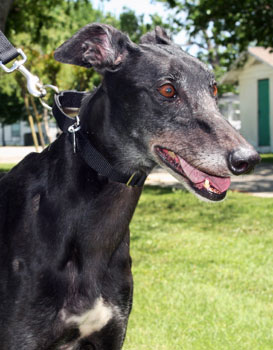 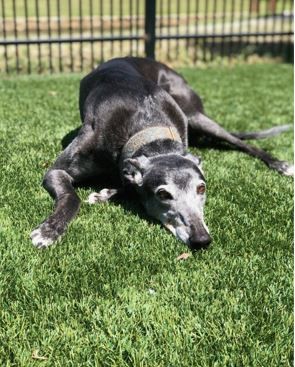 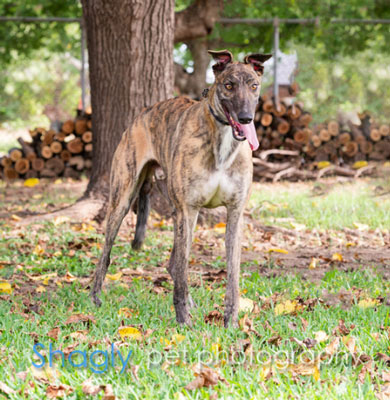 Pledge #8 was made by Linda and Rick Vayo, who started GALT’s Amanda and Emmet Golden Years Fund in 2018, in honor of their sweet senior greys. The Vayos subscribe to the mantra of many others in GALT: Adopting a senior greyhound is the best kept secret in the greyhound world! Sadly, both Amanda and Emmet have traveled to the Rainbow Bridge. Rick and Linda can think of no better way to honor the memory of their Super Seniors than by joining the GALT 20th Anniversary All-Star team. 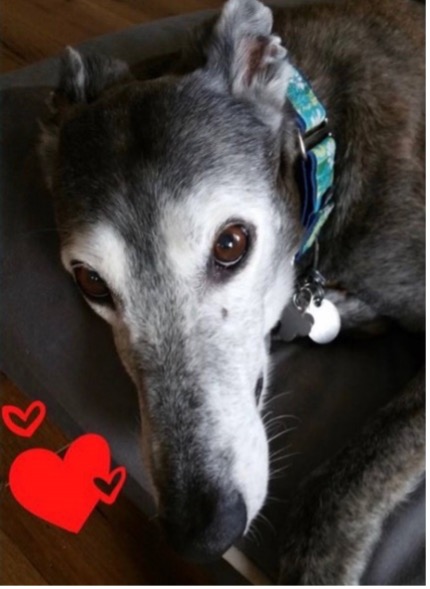 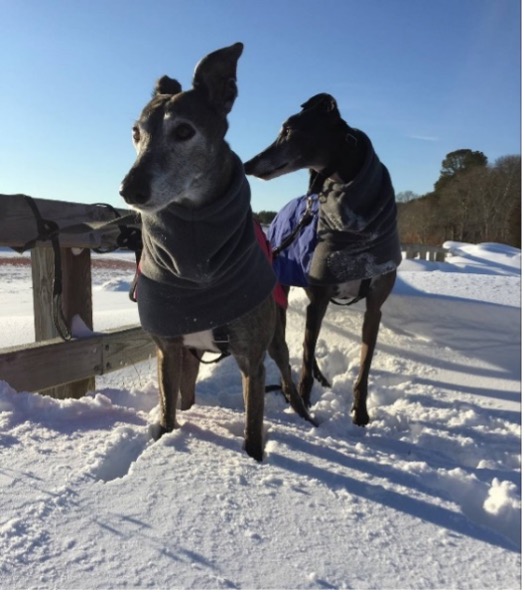 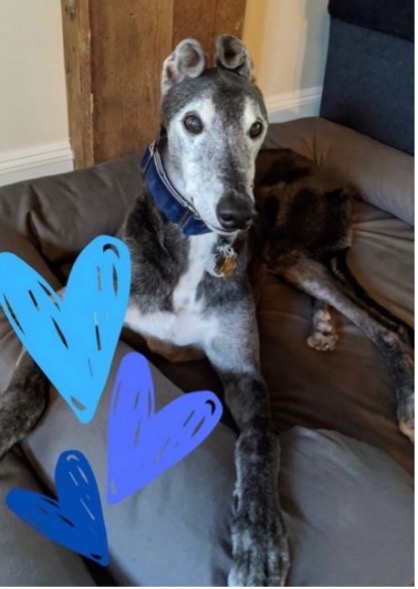 We deeply appreciate the generosity of GALT’s 20th Anniversary All-Stars!